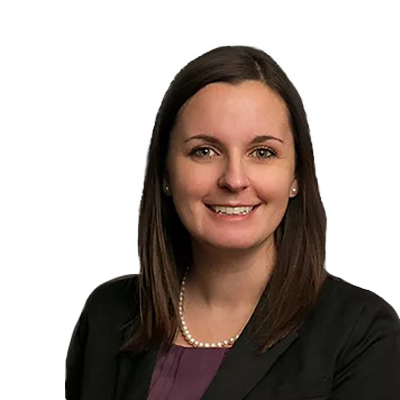 Some attorneys never get to work on a United States Supreme Court case. Kimberly Rahn did it her first year after law school. As part of a year-long fellowship at Penn State Law’s Civil Rights Appellate Clinic, she worked on Coleman v. Maryland Court of Appeals, an employment discrimination case that went before the United States Supreme Court. She helped prepare the petition for writ of certiorari, which was granted; draft the legal briefs; and prepare her colleagues for oral arguments.

Kimberly then worked in a Chicago law firm supervising a staff of 30, including four other attorneys. Her team represented major banks in over 400 residential and commercial foreclosures over a period of 20 months. She appeared regularly in court and developed expertise in mediating cases, resolving disputes, obtaining settlement agreements, and pursuing and defending cases on appeal.

Today, she utilizes those same skills to obtain favorable judgments and settlements for claims brought under the Longshore and Harbor Workers’ Compensation Act and the Defense Base Act and to seek reimbursements for large insurance companies under the War Hazards Compensation Act.

Kimberly truly enjoys the people she works with — particularly her clients and colleagues at SBSB Eastham Law. She is known for providing timely and thorough responses to client queries and for working with adjusters to efficiently resolve cases. She knows this is not a one-size-fits-all arena, and makes sure her clients’ unique needs, goals and timelines are given the focus and attention they deserve.