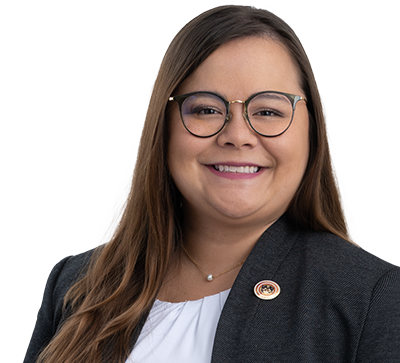 Before joining SBSB, Shiena Marie N. Burke clerked for Administrative Law Judge Angela Donaldson in Covington, Louisiana for two years. This experience gave her a unique hands-on approach and view into the court’s perspective on many of the legal challenges her clients currently face. It also gave her critical insight into incorporating creativity, precise research and concise writing to the court on behalf of her clients, because of her unique ability to analyze the law from an adjudicator’s perspective. Her experience with war zone cases hits very close to home for her since she spent her childhood living overseas as a Navy brat.

At Loyola, Mrs. Burke was the Oralist and Brief Writer for the Admiralty Moot Court Team, the Comment & Symposium Editor for the Loyola Maritime Law Journal, a Student Practitioner in the Immigration Clinic and President of the Asian Pacific American Law Student Association. She also received the Highest Grade Awards in Louisiana Property I and a Seminar in Marine Pollution. Her legal experience includes clerking with the Louisiana Supreme Court, the Eastern District of Louisiana Federal Public Defenders Office, the Orleans Public Defenders Office and the United States Navy Judge Advocate General.

Mrs. Burke provides her client a diverse set of skills and a unique educational background focused on the analytical and experimental aspects of Biology, in addition to her robust legal training. After obtaining her Political Science degree with a Minor in Microbiology, Mrs. Burke worked as a Research Assistant at the Louisiana University Marine Consortium (LUMCON) under the Executive Director’s Hypoxia Lab. Her time as a Research Assistant was spent both in the lab and in the Louisiana marsh where she collected samples, cataloged polychatae species and even spent seven days on a vessel in the Gulf of Mexico, mapping the Hypoxia (Dead) Zone. Her love of science and research also blossomed during her undergraduate education when she received a highly competitive fully funded research grant from the Louisiana Sea Grant: Undergraduate Research Opportunities Program, where she conducted research on the chemical effects the BP oil spill relative to particular beach dwelling creatures found on the Louisiana coast, in order to identify a key indicator species which could alert to the presence of oil in the environment.

Depth can be defined as going further than the surface level of things. At SBSB she brings that same depth, looking for the intricacies and overlooked aspects of a case and organizing the facts and law in a way that can make all the difference for her clients.